A touch of reality to ICICI Bank investors recent exuberance

The management of ICICI Bank Ltd made all the right noises at its analyst day last week, and the resulting exuberance is seen in the stock. Since then, the stock has risen over 3%, taking the total gain for 2019 so far to more than 50%. This is far higher than what the sectoral index or even close peers such as Axis Bank Ltd witnessed.

What pleased investors was the focus on operating profit by the bank, which directly boosts return on equity (ROE). Analysts believe that the lender would be able to achieve an ROE of 15% by the first quarter of FY21 and some expect it to even surpass this target. ROE for first half of FY20 was 4.7%. “While management continues to guide for just 15% ROEs by 1QFY21, we expect 16-17% in the next 12-18 months," analysts at Nomura Financial Advisory Pvt. Ltd wrote in a note. 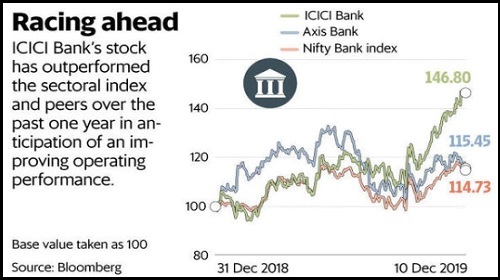 The confidence stems from the management’s pitch that the bank has infused granularity in its lending and has shifted focus from transaction-based banking. In other words, it has reduced concentration on borrowers and instead decided to cross-sell its products.

So far, so good. But the risks cannot be ignored. The biggest of them is getting growth in a slowing economy. Corporate loan growth hasn’t recovered and retail too is showing signs of slowing down. Excluding securitization deals, bank retail loan growth has decelerated to a five-year low, according to Crisil Ltd.

One side effect of a slowing economy is the risk of delays in loan repayments. While ICICI Bank has managed to hack through its bad loan pile, it cannot wish away fresh stress.

Stressed loans were around 9% of its book as of September quarter and to this, the pain from telecom and the latest fiasco involving Karvy Stock Broking Ltd can be added.

When it comes to income growth, a lot will depend on how much the bank gets to reduce its bad loans further.

The increase in target prices by brokerage firms stems from the positive message from the management on operating metric. A stable management, enviable distribution network and considerable heft on liabilities give ICICI Bank an edge over its peers. After the more than 50% gain this year, most of the positives appear priced into the stock.

From here on, it all comes to how ICICI Bank shines up its books through resolution and recovery. And here, it is not an outlier in the industry.

Intraday trading is an art of earning money from stock market and it requires a lot of patience and time to allocate in the daily schedule.

As Infosys steps up payouts for staffers familiar concerns arise

Indian stock gains to be limited in 2020 as economy slows: Reuters poll

Vedanta warns it may have to process ore outside South Africa